skip to main | skip to sidebar

I have only seen a Cirque Du Soleil show once before (you can read about it here). I was absolutely taken aback at how beautiful the show was, I mean it was stunning, it made me feel like a little kid again. So when I was approached to do a review of the DVD/Digital Copy/Blu-Ray (read: not live) version of Cirque Du Soleil: Worlds Away-I was hesitant at best.

I mean I was game, but I just wasn't sure that the wonderment that I experienced at the live show could be captured in a non-live version. So I received the DVD in the mail (along with a fun goody bag full of Cirque swag) and I gave it a chance. I popped it in the DVD player and instantly my attention was grabbed. The fantastical visuals that grabbed my attention in the live show was now working its magic on me at home-but in a different way. I feel like the DVD offered something that the lives show couldn't possibly offer-like detail. It was so pretty. Like, couldn't look away, pretty.

So all that is to say that, I recommend picking up a copy of Cirque Du Soleil: Worlds Away. I can easily seeing this being perfect for a fun night in with your love or a bunch of girlfriends and a bunch of fun snacks. Your eyes will love what they see!
Posted by Sarah at 8:31 PM 2 comments: 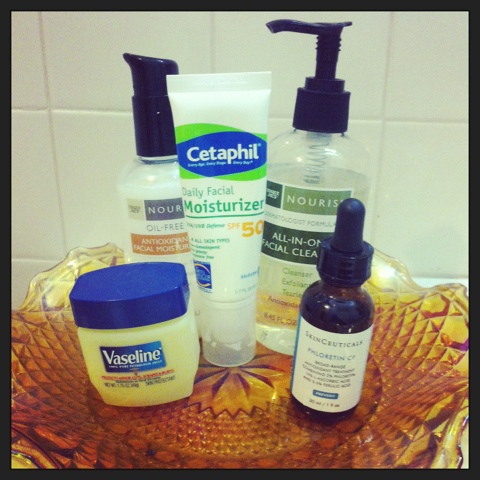 Nourish All In One Facial Cleaner and Nourish All In One Antioxidant Facial Moisturizer:
After all I have been through in trying to get my skin acne free, the last place you would think I would look for skin care is a grocery store. But alas, I have. Word on the street is that the dermatologist that concocted the Nourish Skin Care line is selling a very similar formula in their office for ten times the price! The face wash is a soothing gel that lathers but doesn't dry my face out, and it takes off my make up really well.
The Nourish lotion is really light and oil free. This is a huge selling point for me because I usually feel a super thick mask like feeling when I use other moisturizers which prevents me using it...and I don't know about you but moisturizers don't work well when they are sitting on your shelf and not on your face. But this one seems to be melt right in to your face and leaving it feeling fresh and dewy.

SkinCeuticals Phloretin CF:
Now I know this item is pretty darn pricey. In fact I bought it from my dermatologist and then had instant buyers remorse. I wasn't able to return it and now looking back, I am glad I didn't. All it takes is four little drops a day and it tightens up my pores and leaves my skin looking super "fresh". I don't know how else to describe it except "fresh". The overall look of my skin has been transformed and I honestly don't think I can go back!

Clinique Clarifying Lotion 2:
(Not Pictured)
I usually avoided toners because they dried my face out like whoa. But this one, this one does not do that. I love how after I swipe a cotton pad with this stuff on it my face tingles and almost feels like its breathing. Weird...but true.

Cetaphil SPF 50:
I use this every morning to provide a shield of defense for my face when I head out in to the world. SPF 50 might seem a bit like overkill to some...but you never can be to careful when it comes to your skin right?

Vaseline:
Most definitely the cheapest part of my regimine but one of the most important. I keep a little pot of this stuff on my nightstand. Before bed I put some on my lips, cuticles, the back of my hands and around my eyes (ahem, where some little crows feet are starting to tiptoe their way on to my face). 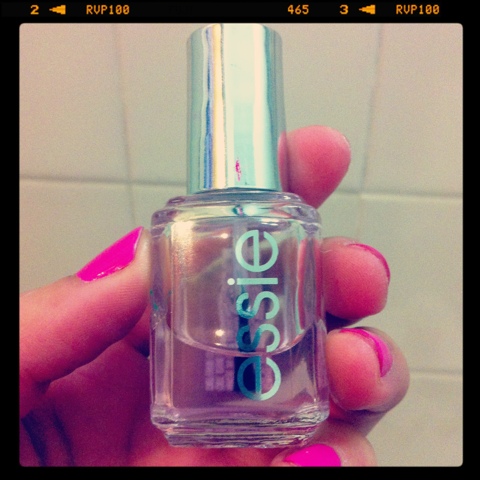 I love painting my nails-big time.
You know what I don't like?
Waiting for said nails to dry.

Well that is no longer a worry for me ever since Essie,Good To Go came in to my life.
I can put a couple coats of my favorite color on and put a thin coat of GTG on and I was truly good to go after a couple minutes. Which means I could look through my purse, put my hair up, or even go to bed without worry of missing up my manicure!

The added bonus is that this topcoat makes my nails look extra shiny! I have had so many people ask me if my manicure was a gel one because the topcoat gave my nails such a nice, shiny, finished look.
It retails for about $10-and worth every penny!!
Posted by Sarah at 9:00 PM No comments:

Near, Far, Wherever You Areeeee 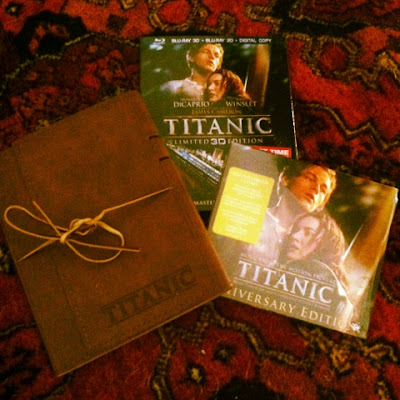 For reasons of protecting whatever shred of coolness I possessed, I have never divulged just how big of a  Titanic fan I was when it first came out...and truth be told I still am. When the movie came out 15 years ago (really? 15 years ago?!) I was a 13 year old that was gaga for Leonardo, had two fish named Jack and Rose and I saw the movie (in the theatre) ....10 times. Do you still love me?

So when Katelin asked if I would be interested in reviewing the new blue ray version/15th anniversary/100th anniversary of the Titanic sinking version of the movie I said YES,I'LL NEVER LET GO KATELIN! I received a journal (similar to Jack's in the movie)-I told Jon to draw me like one of his French girls and he said it would be awkward for all involved. So I guess I'll just have to use the journal for something else. I also received a remastered, anniversary edition, of the soundtrack. Not only does the soundtrack have all of the beautiful music from the first time around but it has music from the period of the Titanic. So cool right? It also came with four Titanic luggage stickers.

Now let's not forget about the star of the show-the movie itself. The movie is totally remastered and now with blu-ray and high definition I really feel like the movie can now be seen at home in a way that lives up to the quality and detail that is inherent to the movie! (see I told you I was serious about this). So you may be wondering if this fancy schmancy anniversary edition is worth picking up?-I would have to say heck yes! Its perfect for the OTF (original Titanic Fan) and the detail  in high definition is perfect for being introduced to it a first time!
Posted by Sarah at 10:42 AM No comments: 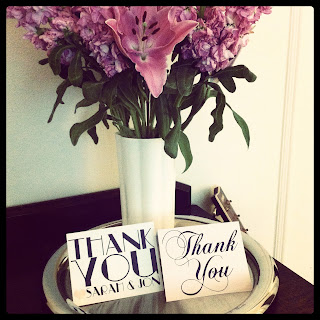 If you have been following my journey to the altar on my main blog, you have probably realized that the journey has been anything but smooth. I mean, its been rough. But you know what wasn't rough? Ordering my thank you cards. I had originally thought I would just buy some of the pre-made thank you cards in the store but as I searched for them I didn't really see anything that I thought was worth spending a lot of money on.

I then remembered that one of my internet friends, Ashley, had a design business (Little Leaf Design) and she had made some great thank you cards for another friend. So I contacted her and she speedily gave me a very reasonable quote and just like that we were on the path to designing thank you cards for the wedding as well as my bridal shower.

Ashley sent me a fun questionnaire to get a better feel for what exactly I wanted. After she received that she sent me color swatches and sample designs. Once we had all that firmed up the thank you cards were in the mail and on their way to me. It was almost too simple compared to the craziness of the rest of the wedding planning. I was so pleased with the designs that were totally unique to me-she really did a great job!

So if you are looking for design of any kind I suggest you give Little Leaf Design a look.
Posted by Sarah at 7:40 PM No comments:

I have been pretty faithful to my Lash Blast Mascara for years now but I got a little cray cray and decided to branch out a bit. I'm not going to pretend that it was something else other than the shiny gold packaging that caught my eye, 'cause it totally was. I like me some gold. 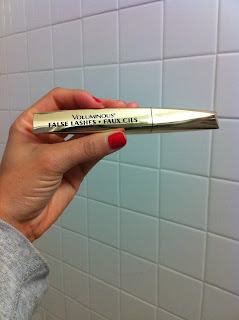 So I brought it home and cracked it open with the highest of hopes in mind. Let me tell you this, I wasn't wowed. It did make my lashes appear thicker. But not in a voluminous way, more in a way that looked as though I had put some brownie batter on my eye lashes. Not a fan. 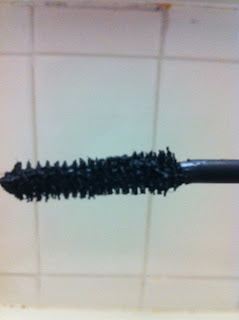 It's kinda hard to tell here but when I took the brush out of the container it was super clumpy and just-bleh. So sadly, my foray into new mascara fell flat but I am not dissuaded friends-I will keep looking for the best mascara for us all!
Posted by Sarah at 8:29 PM No comments: 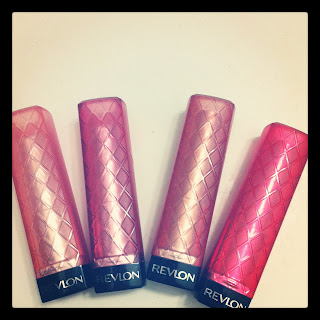 So I first heard about these fancy lip sticks called Lip Butters from Morgan, Mrs. Priss herself. She seemed almost entranced by these little beauts. So I said "heh, maybe I'll check them out". AND THEN the whole internet was aflame with Lip Butter madness. Like, everyone wanted some and those that didn't want some already had 46!

So I became resolute to make some Lip Butters mine and I went to my local Walgreens and guess what?! They were buy one get one for 50% off. They were nearly sold out so I grabbed what they had left and was so excited to try them on.

Well I tried them on and to my surprise they were really smooth feeling, almost sheer feeling. But get this the color wasn't sheer, it was vibrant! I was in love! What's more? It stayed on as I ate and drank and talked. It was awesome. So I did what anyone would do in my situation, I went and bought two more.

and the sick part is...I want more!
Do you have any Revlon Lip Butters?
Posted by Sarah at 8:28 PM 1 comment: 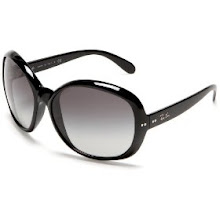 Slynnro introduced me to these and now they are all I can think about!